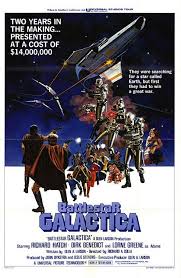 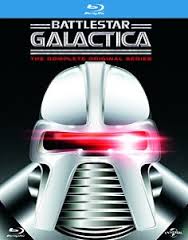 One of the most spectacular television programs ever produced, Battlestar Galactica: The Complete Original Series blasts its way on to Blu-ray for the first time.The release features the original seasons from 1978 – Battlestar Galactica and 1980 – Galactica 1980 and includes brand new exclusive bonus content not available on current DVD releases.

Legendary TV producer and writer Glen A. Larson sadly passed away this week aged 77 – Larson was most famous for creating Battlestar Galactica one of the most spectacular and ambitious television programmes ever produced in the 1970s.

The Ideology: All Battlestar Galactica productions share the same basic premise – in a distant part of the universe, a human civilisation has extended to a group of planets known as the Twelve Colonies, to which they have migrated from their home planet of Kobol. The Twelve Colonies have been engaged in a lengthy war with a cybernetic race known as the Cylons, whose goal is the extermination of the human race.

Fun Facts :The daggit ‘Muffit’ was played by a trained chimp in costume / The humans in the show had their own units for measuring time – a ‘micron’ (second), ‘centon’ (minute), ‘centar’ (hour), ‘secton’ (week), ‘sectar’ (month) and ‘yahren’ (year).