ANOTHER ME: Actress Sophie Turner Interviewed.

September 8, 2015 / giallo1971 / Comments Off on ANOTHER ME: Actress Sophie Turner Interviewed.

You’re best known for playing Sansa Stark on Game of Thrones, how was it different making a feature film?

It’s funny, it wasn’t that different making Another Me in terms of the shooting because Thrones is shot like a feature film anyway. However, it was really refreshing to shoot a contemporary film and with such a small cast and crew. On Thrones we’re all like one huge huge family but you don’t get to spend much time with all of them because, with cast and crew combined, we must have at least 800 people working on it, whereas on Another Me there were around 30 cast and crew members, which meant we all bonded very quickly.

Did you relate to your character Fay?

I think Fay is very relatable. I personally haven’t been through most of the craziness she experiences in this film but I can still relate. She’s just a normal girl who has a lot of hardships in her life and then something happens to her which makes her go kind of crazy and paranoid but every single emotion she conjures up is totally justifiable every step of the way despite how extreme they may be. I think if any young girl went through what she goes through, they would react exactly the same. She’s a normal girl experiencing extraordinary things.

What’s it like seeing yourself on the big screen?

It was very strange seeing myself on the cinema screen for the first time at Rome Film Festival. I do really hate watching myself and I am definitely my biggest critic but there was something so exciting and almost moving about sitting next to Isabel, our director and Gregg and watching this little passion project come to life.

How did you get the role?

I got the role through the boring, ordinary route. My agent sent me through the script, I loved it, I auditioned and I got it. I wish I had a more interesting story than that but I’m afraid that’s it!

Are you from a theatrical family? Are they supportive of your career path?

On my mum’s side of the family there are performers. My great, great grandfather was a professional violinist, my granddad still performs on stage and he has done so for most of his life. My mum always had a love for acting too. So they’re all very supportive, I’m very lucky to have them.

There are lots of twists and turns in the movie, what was it like to play such a deep and emotive role?

It was so much fun but it was also a huge challenge as well. I would be sleeping in between takes towards the end of the shoot because Fay goes on this emotional (I’m reluctant to use this cliché term) rollercoaster. But it really took everything I had and it was very rewarding being able to use up all my emotions like that.

Gregg Sulkin is incredible. He is such a brilliant, brilliant actor. He doesn’t take himself seriously and he is so fun to have around on a film set and then the camera starts rolling and he is just in the zone. He is also a very caring person; in this movie there’s a scene where my character and his get fairly intimate and he was so sweet to me and really protective that day as it was my first time doing that kind of scene. I’m so lucky to call him a friend. Just an amazing guy and actor.

And what about working with the talented Jonathan Rhys Meyers?

Jonathan was mind-blowing to watch. He improvised nearly all his scenes and he just totally embodied his character even when the cameras weren’t rolling. He was our drama teacher in front and behind the camera. He is just so on the ball and prepared. He’s an actor to be admired.

What about the rest of the crew and cast? Who did you especially bond with?

Every single person working on Another Me bonded. Rhys Ifans, who plays my father in the movie, really felt like a fatherly figure to me. He took me under his wing and his performance is mesmerising. I definitely bonded a lot with him and Claire Forlani who plays my mother, she is crazy funny and such a talent too.

Whose career do you admire? Your role models?

I have so many people who I admire or whose careers I admire. I would love a career like Jack Nicholson, all of his characters are so different. I have so many role models in my life but mainly my mum, my dad and my brothers.

You’re clearly a great role model for young girls, what keeps you grounded?

I think my brothers’ keep me grounded. They would never let me get big headed at all. If I did they would probably rugby tackle me to the floor! Neither of my brothers are interested in acting and so they don’t really get it when people say they look up to me because they still see me as the annoying little sister and they like to keep reminding me of that! 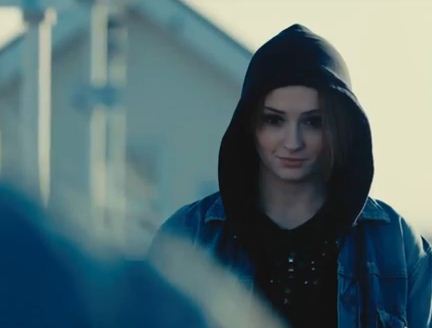 You’re only 18 and already starring on one of the highest rating shows on TV, you’ve earned a Young Artist Award nomination and you’ve starred in a couple of feature films, what’s next?

Next up, I have two more movies coming out; I have an indie drama set in New York with Ray Liotta and Mark Kassen called ‘Alone’ and ‘Barely Lethal’ which is an action comedy with Hailee Steinfeld, Samuel L. Jackson and Jessica Alba. I’m also just attached to shoot a movie about Mary Shelley with Jeremy Irvine and Taissa Farmiga.