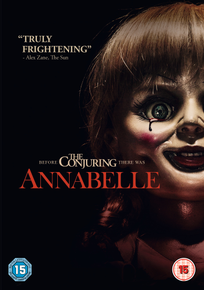 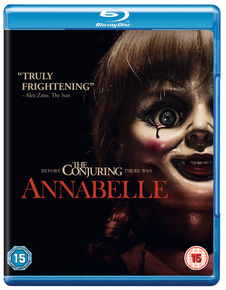 Discover the secret of what she wants when “Annabelle” arrives onto Blu-ray™, DVD and Digital HD on February 23rd and EST on February 9th from Warner Bros. Home Entertainment. Reuniting the filmmakers behind 2013’s hugely successful supernatural thriller “The Conjuring”, “Annabelle” is the terrifying story of where it all began as Annabelle comes to life.

Starring: Annabelle Wallis, Alfre Woodard, Ward Horton, Tony Amendola, Eric Ladin, Brian Howe.
John Form has found the perfect gift for his expectant wife, Mia—a beautiful, rare vintage doll in a pure white wedding dress. But Mia’s delight with Annabelle doesn’t last long. On one horrific night, their home is invaded by members of a satanic cult, who violently attack the couple. Spilled blood and terror are not all they leave behind. The cultists have conjured an entity so malevolent that nothing they did will compare to the sinister conduit to the damned that is now…Annabelle.

“Annabelle” was directed by John R. Leonetti, who served as cinematographer on “The Conjuring.” James Wan, director of “The Conjuring,” produced “Annabelle” along with Peter Safran. Richard Brener, Walter Hamada, Dave Neustadter and Hans Ritter served as executive producers for the film which came from the script written by Gary Dauberman.

● The Curse of Annabelle

● Dolls of the Demon

● The Curse of Annabelle