THE AMITYVILLE HORROR (Stuart Rosenberg/1979) US Blu-ray OUT NOW. 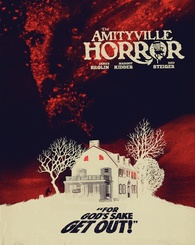 George and Kathy Lutz, a newly married couple with three children from Kathy’s previous marriage, purchase a large house in Amityville, New York, where a multiple murder took place the year before. Strange things happen as soon as they move in. Father Delaney, Kathy’s friend and priest, is stricken ill when he tries to bless the house, and he becomes convinced that Kathy and her family are in danger. The policeman who investigated the original murders notices an odd resemblance between George Lutz and the man convicted of those crimes. Based on a true story.