THE AUTOPSY OF JANE DOE RELEASED IN UK CINEMAS FOR A ONE-NIGHT-ONLY SPECIAL PRESENTATION TOMORROW!

March 30, 2017 / giallo1971 / Comments Off on THE AUTOPSY OF JANE DOE RELEASED IN UK CINEMAS FOR A ONE-NIGHT-ONLY SPECIAL PRESENTATION TOMORROW! 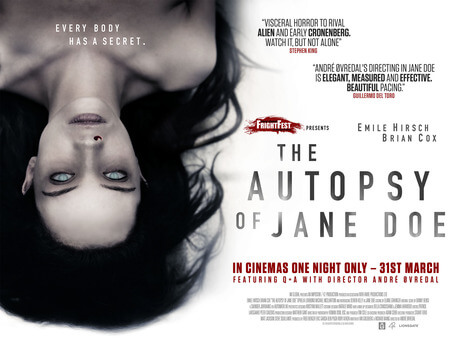 The film will be showing in over 60 cinemas nationwide, will also feature a 15 minute Q+A with the director André Øvredal.

Along with impressing the godfather of genre, Stephen King, who described the film as a “visceral horror to rival ALIEN and early Cronenberg”, the one-night special presentation is co-hosted by Frightfest, the UK’s brand leader for recognising totally unexpected and surprising genre titles, alongside Lionsgate UK. This unique cinema event will not only showcase the film but will also include a 15-minute Q&A with Trollhunter filmmaker Andre Øvredal hosted by Frightfest’s very own king of horror, Alan Jones.

Experienced coroner Tommy Tilden and his grown-up son Austin run a family-owned morgue and crematorium in Virginia. When the local Sheriff brings in an emergency case – an unknown female corpse nicknamed ‘Jane Doe’, found in the basement of a home where a multiple homicide took place – it seems like just another open-and-shut case. But as the autopsy proceeds, these seasoned professionals are left reeling as each layer of their inspection brings frightening new revelations. Perfectly preserved on the outside, Jane Doe’s insides have been scarred, charred and dismembered – seemingly the victim of a horrific yet mysterious ritualistic torture. As Tommy and Austin begin to piece together these gruesome discoveries, an unnatural and terrifying force takes hold of the crematorium. While a violent storm rages above ground, it seems the real horrors lie on the inside…

THE AUTOPSY OF JANE DOE is directed by André Øvredal (Trollhunter, Mortal) with the original screenplay written by Richard Naing and Ian Goldberg. The film is produced by Fred Berger (LA LA LAND), Eric Garcia (Cassandra French’s Finishing School), alongside Ben Pugh and Rory Aitken from UK-based production and management outfit, 42 (The Other Side Of The Door, Welcome to the Punch, Shifty). The cast is led by Brian Cox (Manhunter, Braveheart, RED, The Escapist, Churchill) as seasoned coroner Tommy Tilden, Emile Hirsch (Killer Joe, Speedracer, Into The Wild, Lone Survivor) as Tommy’s grown up son Austin, Ophelia Lovibond (Guardians of the Galaxy, Nowhere Boy, Man Up) as Austin’s girlfriend, Michael McElhatton (Game of Thrones, The Hallow) as Sherriff Burke and Olwen Kelly as Jane Doe.