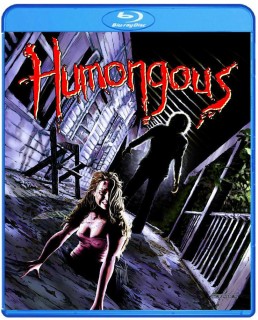 A group of teens on a boat trip get caught in a dense fog and run aground on the rocks of the mysterious ‘Dog Island’. They take refuge on the island only to find one of the group is missing and another is critically injured. Unfortunately they are not alone on the island. Something is loose… it’s angry… and very hungry! Starring Janet Julian (TV’s NANCY DREW, CHOKE CANYON), David Wallace (MORTUARY), Janit Baldwin (PRIME CUT, RUBY) and directed by Paul Lynch (PROM NIGHT, CROSS COUNTRY), now watch this slasher classic in high definition!

The first 2,000 copies of HUMONGOUS will include a slipsleeve featuring custom artwork by artist Kung Fu Bob.