May 3, 2016 / giallo1971 / Comments Off on Simon Sheridan’s RESPECTABLE: The Mary Millington Story out now on DVD. 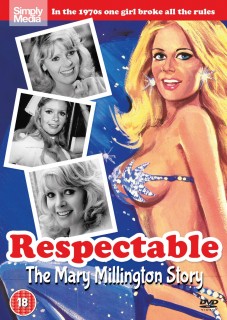 Author and filmmaker Simon Sheridan first documented Mary Millington’s short film career and even shorter life in his book ‘Come Play With Me:The Life and Films of Mary Millington (1999) and ‘Keeping the British End Up: Four Decades of Saucy Cinema (2011).Simon is the oracle when it comes to all things Mary and his documentary,RESPECTABLE: The Mary Millington Story,out now on DVD from Simply Media is one of the most detailed and fascinating spotlights on any celebrity I have ever seen.Many film lovers unfamiliar with Mary’s career in the saucy cinema of the ’70s and her fall from grace and tragic death will be both fascinated and deeply saddened by this film.By the final frame we feel as though we know Mary.As we begin to fall in love with her we know that this story will not end well.Respectable packs a real emotional punch and is the final word on the life and career of Mary Millington.