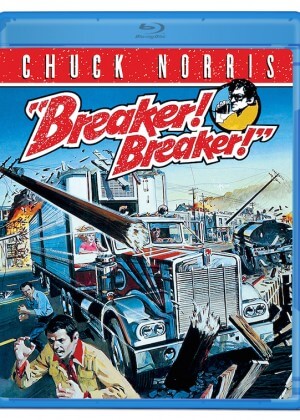 Breaker! Breaker! features Chuck Norris at his butt-kicking best as a trucker on a mission to locate his kidnapped brother.

J.D. Dawes (Norris) finds himself run afoul of the corrupt and unscrupulous Judge Joshua Trimmings (George Murdock, The Mack) and his henchmen, when he ventures into a small desert town in search of his missing brother.Judge Trimmings doesn’t much like truckers … and Dawes doesn’t much like anyone who messes with his family – it’s a combustible combination in the high-octane action drama Breaker! Breaker!, directed by Don Hulette (A Great Ride), written by Terry Chambers (13 Nuns) and co-starring Jack Nance (Eraserhead), Michael Augenstein (Macbeth), Don Gentry (Born Again) and Terry O’Connor.